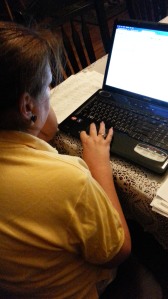 My mother Nancy researching our ancestry.

In last week’s article, Frederick II’s 21st Great Granddaughter, I announced a serendipitous discovery made by my genealogist mother, Nancy Cefalo.  To make a long story short, even though it seemed that I had no German ancestry–which was quite disappointing since I write Medieval fiction set in Germany– it turns out that I do.

I am a descendent of the man who was emperor at the time of The Great Interregnum.  Frederick II–the man who reigned over the place I have researched for the last five years–is my 21st great grandfather.

In honor of this discovery, I am dedicating a week of posts to Emperor Frederick II.

Today I am posting a short documentary, Frederick II a bridge between East and West, which focuses on Frederick’s desire to reach beyond cultural barriers to broker peace and increase learning during a time when religious and cultural tolerance was discouraged.