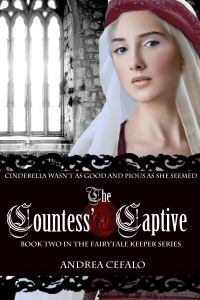 During March of 1248, Adelaide Schumacher‒affectionately called Snow White‒has lost so much: her mother, her possessions, and now her home.

Adelaide hates abandoning her home city, her family’s legacy, and her first love‒Ivo.  More than anything, she hates her father growing closer to her mother’s cousin-Galadriel.   Adelaide plots to end their tryst before her fate is sealed, and she never sets foot in Cologne again.

The Countess’ Captive is the much-anticipated follow-up to Andrea Cefalo’s award-winning debut novel, The Fairytale Keeper. The second installment in this young adult fairytale adaptation paints a vivid portrait of Medieval Europe and breathes life into Grimm’s most famous heroines and villains in suspenseful tales that leave readers wondering where fact ends and fiction begins.