For most people living during the Middle Ages, life was short and harsh. Unsanitary conditions and habits led to the spread of some horrific diseases. Due to the general ignorance and superstitious nature of the population, people resorted to ineffective treatments that sometimes made symptoms worse. From the unexplained madness of two kings to the miraculously cured boils plaguing Parisian peasants, below are six of the strangest Medieval diseases. 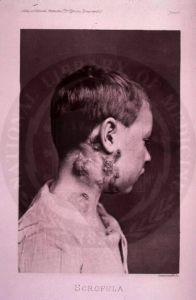 Black masses cover the neck of this boy suffering from scrofula.

6. The King’s Evil (Existed throughout the Middle Ages)

The Problem:  The king’s evil caused painless black masses to spread across the neck. As the disease progressed, these masses ruptured, resulting in large open sores.  Perhaps even stranger than the disease was the proposed cure: the touch of a king.  In fact, an Anglican prayer book entitled The Book of Common included a ceremony in which the king handed afflicted people “holy” coins.  It is documented that King Henry the IV of France touched and cured 1,500 sufferers of the ailment.

The Cause:  Scrofula is a lesser-known type of tuberculosis that infects the lymph nodes rather than the lungs. The current treatment for the disease is nine to twelve months on antibiotics. While so many months on antibiotics is an inconvenience, it is far more effective than the touch of a king.

The Problem:  Sufferers of this strangely named disease developed sores, blackened nails, and watery eyes.  It was believed to be caused by a witch’s stab.  Much like the king’s evil, this disease had some odd treatments. Victims ingested a dozen different plants and herbs, soaked in ale, and then sang the first verse of the song below three times and the refrain repeatedly.

“I have bound on the wounds the best of war bandages, so the wounds neither burn nor burst, nor go further, nor spread, nor jump, nor the wounds increase, nor sores deepen. But may he himself keep in a healthy way. May it not ache you more than it aches earth in ear.

“May earth bear on you with all her might and main.”

The Cause:  While the source of this disease remains unknown, it shares similar symptoms with endocarditis, an infection of the heart valve. Endocarditis occurs when bacteria infecting one part of the body spread to the heart through the bloodstream. Today, the disease is rare and most commonly afflicts people with weakened hearts. But when we consider how ineffective medieval treatments were for bacterial infections and weakened hearts, it seems likely that the disease was more common during the Middle Ages than it is today. 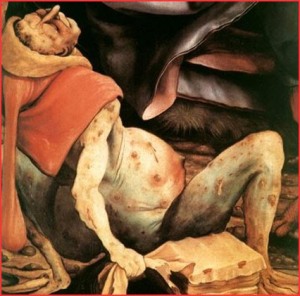 This detail of Bosch painting illustrates the painful boils covering a victim of St. Anthony’s fire

The Problem:  When the people of Paris were tormented with painful boils and sores, the only cure seemed to be a trip to St. Mary’s church in Paris. There Duke Hugh the Great nourished the ill with his own holy stores of grain.  The ill quickly recovered, but as soon as they returned home, they were plagued again with the terrible sores.

The Cause:  Ergot is a fungus that grows on rye during cold, damp conditions.  When the grain is ground up and then made into bread, people consume the fungus and poisoning ensues.  There are three different types of ergotism: gangrenous, convulsive, and hallucinogenic.  In the case of the Paris epidemic, sufferers were stricken with the gangrenous type of ergotism.  So why were victims cured when they went St. Mary’s?  The answer is simple. Since Duke Hugh’s stores of grain were better maintained, they weren’t contaminated with ergot. When people ate his grains their ergotism went away, but as soon as they returned home, they consumed their contaminated grain and were poisoned again. 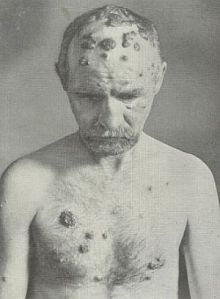 This victim of pustular syphilis suffered the spread of painful boils.

The Problem:  During the siege of Naples in 1493, a strange disease spread rapidly from the French to the Italians, causing sores at the site of infection. As the illness progressed, painful, green, pus-filled boils spread across victims’ bodies.  Eventually, the disease affected the mental capacities of its victims and many went insane.  Because the Italians were first infected during the French invasion, the illness became known as the French disease.  It quickly spread throughout Europe, but within fifty years, the disease and its symptoms became less debilitating.

The Cause:  The first European epidemic of syphilis had, by far, the worst symptoms. Some hypothesize that the sexually transmitted disease originated in the Americas, was brought back to Europe by Spanish sailors, and spread from there. It’s also assumed that a lack of exposure to the disease (or anything like it) may have been the reason Europeans suffered such severe symptoms.

So why did the symptoms become so mild so quickly?  That is quite simple.  People avoided contact with anyone covered in the nasty boils, and without physical contact, a sexually transmitted disease can’t spread. As time passed, only strains with milder symptoms spread because their carriers weren’t so easy to spot. 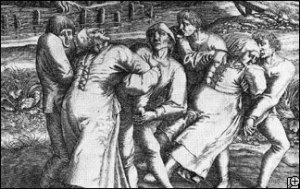 This print illustrates the near insanity suffered by victims of the Dancing Plague.

The Problem:  The two best-documented cases of the dancing plague took place in Aachen, starting on June 23, 1374, and later in July 1518 in Strasbourg.  The 14th-century outbreak spread throughout Germany and then into France, Holland, and Italy.  People afflicted with the disease danced uncontrollably.

The Strasbourg outbreak started with one woman named Frau Troffea.  Within four days, more than thirty people joined her.  By the end of the week, the number rose to four hundred.  People danced constantly for weeks, dying of heart attacks, strokes, dehydration, and exhaustion.  The supposed cure for the ailment according to physicians of the time? More dancing.  Towns hired musicians and built stages to encourage the sick to continue  dancing, which probably didn’t help.  Some believed St. Vitus and St. John “blessed them” with the Dancing Plague. This may have encouraged healthy people to join in with the sick because they wanted others to think they were also touched by saints.

The Cause:  Unknown.  Eugene Backman suggests ergot poisoning was the culprit in his book, Religious Dances in the Christian Church and in Popular Medicine. There certainly are types of ergotism that cause hallucinations and strange behavior.  I, for one, find this hypothesis hard to believe. Since ergot poisoning is caused by ingesting ergot-tainted rye, then rye would have to have been tainted throughout all of Europe at the time. Since the disease seemed to spread from a central location over time, it seems more likely that the culprit would have been a contagion rather than a fungus.

Some suppose that Sydenham’s chorea, also known as St. Vitus dance, was the cause.  Symptoms of this disease—caused by a strep bacteria—usually take a considerable amount of time to demonstrate, six months or more. But sometimes the rapid jerking of the face, hands, and feet associated with the disease can be the first symptom.

Historian John Waller, author of  A Time to Dance, A Time to Die: The Extraordinary Story of the Dancing Plague of 1518, has an even stranger hypothesis.  He believes that the dancing plague was caused by a “mass psychogenic illness” brought on by severe stress due to famine, illnesses, and the belief that, when angered, a Sicilian martyr by the name of Saint Vitus would cause these dancing plagues. 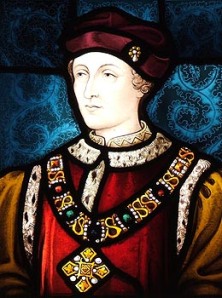 The catatonic states that King Henry VI experienced may have been hereditary.

The Problem:  In 1453, while in his young thirties, King Henry VI of England slipped into a catatonic state after a supposed sudden fright.  His first trance lasted over a year and a half—though he slipped in and out of this odd mental state for the rest of his life.  During his first lapse, Henry remained asleep. Not even torturous treatments elicited a response.  When he finally came out of the catatonic state, he was said to be very agreeable, devout, and childlike.  He often did not recognize people whom he had known for years.  His inability to rule caused him to lose his throne to the Yorks during the famous War of the Roses.  He died in the Tower of England.  It is suspected he was murdered so that no one would continue to fight for his cause.

The Cause:  Unknown.  This is one of the greatest medical mysteries in all of history.  Some suppose that Henry suffered from catatonic schizophrenia since he illustrated paranoia, delusions of grandeur, and hallucinations before slipping into his unresponsive state.

Whether catatonic schizophrenia or not, Henry’s illness seems to be heredity. His grandfather, Charles VI, suffered through extended bouts of insanity alternated with periods of lucidity, as well.  Charles once murdered four of his own men before being tackled to the ground. Afterward, he slipped into a coma for two days. Unlike Henry, Charles suffered from physical symptoms, such as fever, hair loss, and loss of fingernails, but I wouldn’t let that rule out a heredity mental illness. A separate disease may have caused Charles’ physical symptoms.

Andrea Cefalo is a historical fiction novelist and history blogger. Her debut novel The Fairytale Keeper, was a quarter-finalist in Amazon’s 2013 Breakthrough Novel Contest. The sequel–The Countess’s Captive—is now available.  She is currently working on the third book in her series.