Andrea Cefalo is a Medieval fiction author and Medieval history blogger. Her debut novel, The Fairytale Keeper,  was a quarter-finalist in Amazon’s 2013 Breakthrough Novel Contest. The next three books in The Fairytale Keeper series –The Countess’s Captive, The Baseborn Lady, and The Traitor’s Target—will debut later this year.
Follow her on Facebook and Twitter. 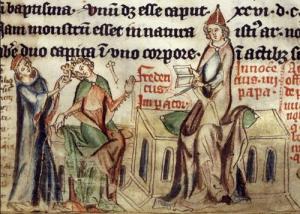 Medieval history is rife with clashes between popes and kings—and the thirteenth century was no exception.  Disagreements between Emperor Frederick II and Pope Innocent IV—over Frederick’s attempts to extend his power in Italy and his reluctance to go on crusade—led to the excommunication and attempted ousting of the Hohenstaufen emperor. With the help of his allies, Pope Innocent selected men to take Frederick’s place. The first of these antikings, Henry Raspe, died only two years after his selection. William of Holland was elected king ten months later.

Since the time of Charlemagne, Holy Roman Emperors and kings were traditionally crowned in Aachen. In Spring of 1248, William’s men rode ahead of their new king to the Medieval city for the coronation, but the gates were barred. The people of Aachen remained loyal to the emperor and refused William’s entry. A skirmish ensued, and sixteen of William’s men were killed.

Because there was an emperor and king already on the thrown, William needed an official coronation so Europe would see him as more than a Church-sponsored pretender. William arrived with his armies approximately a week later, and the siege began. 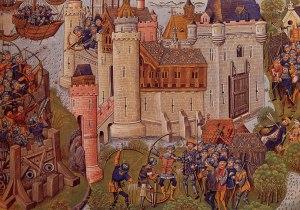 According to the book The Medieval City Under Siege, siege warfare, though common, was ineffective during the thirteenth century for two reasons. First, a lack of gains in military technology meant that city walls and defenses were often stronger than the weapons used to destroy them. Second, most nobles had difficulty rallying an army large enough to  surround a city’s walls. Even if they could, they usually couldn’t feed and supply a large army for months at a time. Luckily for William, he had a strong ally in the pope who had strong allies of his own.

By summer, troops from Picardy, Flanders, and Brabant came to William’s aid. They damned the river flowing through Aachen, causing a third of the city to flood. After the addition of Frisia’s troops in the fall, William’s army finally had enough men to surround the city. Though the people of Aachen lay starving in a flooded city under constant bombardment, they remained loyal to the emperor. It wasn’t until a rumor of Frederick’s death circulated the city that Aachen waved the white flag.

Cologne’s Archbishop, Konrad von Hochstaden, aided in arbitration. The city nobles and the imperial bailiff pledged fealty to the Church and to William of Holland, gaining their freedom and the end of the siege in exchange. William entered the city on October 19th, nearly six months after the battle began. He was crowned on November first.